Here's a little background information about the design, implementation and hardware behind the aprs.fi site. 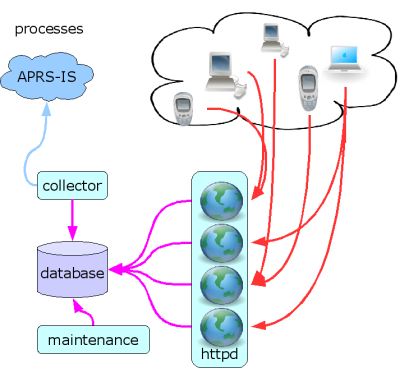 The data collector and maintenance processes run on the primary aprs.fi server. The web user interface runs on multiple frontend web servers, and the real-time map engine runs mostly inside the web browsers of the users.

Although the software is very stable and resilient to problems in the operating environment, all components are run under a supervisor process which takes care of restarting them in case of an exception or a crash.

The web user interface is based on a lightweight template engine. With the exception of unlocalised static information pages (like this one), the layout of the pages has been separated from the content, and the English strings have been moved to a database, so that they can be translated to other languages using a web-based translation tool. Most importantly, the content and layout has been mostly separated from the application code, so that the look and feel can be customised without modifying the software. There are separate layout templates for mobile devices, and it would be straightforward to implement a new look for a new class of devices. 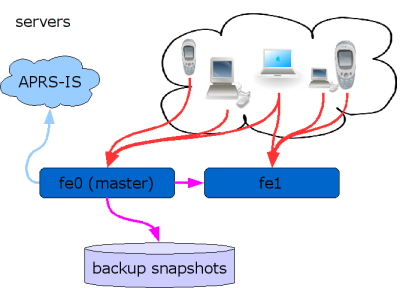 aprs.fi was initially implemented as a service which only ran on a single server, but as the popularity of the site has increased, it has been improved so that it can be run distributed on a number of servers. Distributing the system on multiple computers improves the availability and the performance of the service.

There are a couple of shortcomings in the current setup: The system is currently only configured with automatic failover for the web service. If the primary server fails, position data collection will be down, until the secondary server is manually promoted to act as the primary server. Also, because all of the servers currently store a copy of all data, adding more servers will not improve the system's data storage capacity - it only improves it's availability and the performance of the web service. Adding support for more position transmitters, or increasing the storage time or detail of position data, requires adding disks to all of the servers. Some work has been done to support partitioning the service so that a subset of the servers would handle a subset of tracking devices, but it cannot be utilised or completed until at least 3 physical servers are used.

Taking consistent backups of a large and active database without stopping it for the duration of the backup is fairly tricky, and while it can be done, it does have a performance impact. So, aprs.fi has a dedicated backup snapshot server, which doesn't serve any users directly - it is only used to take backups of the live database.

The backup server is located 9 kilometers away from the live web servers, in the next city. If a fire would destroy the primary hosting site, the backup will still be available.

The availability of the service is monitored using Nagios. The alarm system verifies separately that all the required components of the system are operating correctly, and also does end-to-end tests from the end-user's point of view.

Alarms are sent using both using POCSAG pager messages on the 2-meter amateur radio band, and as SMS messages with a GSM mobile phone which is directly connected to the testing host, so a network outage will be communicated, too. The service is currently run by an individual, so 24/7 operation can not be guaranteed. This is only my hobby, after all.

The software is written in popular scripting languages, and it should run unmodified on all modern Unix platforms, although it has only been tested on Linux and Solaris.

The service runs on proper rack-mounted server hardware. The servers have mirrored (RAID1) disks. If a single disk of a server fails, the server will continue to run happily. The servers also have ECC memory which protects them against single-bit errors caused by background radiation.

The servers are all hosted at a commercial-grade hosting site with cooling, uninterruptible power supplies (backup batteries), a diesel backup power generator, and a halon gas fire suppression system. The site has redundant network connections to multiple Internet providers, and a very stable local network with Cisco routers and switches.